Find this article at:
go.ncsu.edu/readext?852093
— Written By Paul Gonzalez and last updated by Betty Draughon

Livestock producers and horse owners who use summer annuals for grazing and/or haying should be thinking about what to plant this year. Though it may seem early, planning now will mean success later this summer. Some seed may be hard to locate or even unavailable, which will mean choosing a second option. Most producers will probably choose the old standards, pearl millet or sorghum-sudan hybrids. Some producers are now relying on crabgrass as well. Others may even be trying “unique” forages such as lespedeza. Let’s discuss each a little and you can decide what you would like to try.

Pearl millet is probably the annual of choice by most livestock producers. It is leafier than sorghum-sudan hybrids and doesn’t present the risk of prussic acid poisoning. Pearl millet grows 5 to 8 feet tall with peak production during the months of June, July, and August. It is excellent quality forage containing 14 to 18% crude protein and 60 to 65% digestibility. Once allowed to head, millet is less palatable and animals consume mainly leaves. The dwarf varieties are easier to manage for grazing as there is less stem with the same number of leaves as the taller types.

The sorghum-sudan hybrids and sudangrass usually yield more than pearl millet on heavier soils. The hybrids grow 4 to 8 feet tall. Sudangrass is shorter with finer stems. Again, peak production is June, July, and August. Forage quality is good, usually 15% protein and about 60% digestibility, with high dry matter intake. Varieties out now known as brown midribbed, or BMR, seem to offer the best forage quality. The potential for prussic acid poisoning does exist from all varieties of sorghum-sudan hybrids and sudangrass. Avoid grazing young seedlings, young regrowth shoots, stunted growth, and frosted plants. There is no danger of prussic acid from feeding hay or silage from these plants.

Getting the most use from these forages can sometimes be a difficult proposition. They need to be grazed from 14 to 24 inches tall down to around 6 or 8 inches. Intensive grazing will help keep them at the proper height, as will mowing and splitting nitrogen applications. Mowing of stalks after grazing may be needed too. If cut for hay, they should be cut when growth is 30 to 40 inches tall. If bermudagrass is available, producers should consider grazing the annual and cutting the bermudagrass for hay.

One more comment on millets: Some producers may be considering other millets such as Japanese, Browntop, or Foxtail due to these products being somewhat less expensive than pearl millet. Most of these varieties are also much less productive. Japanese millet will yield roughly 80% of that of Pearl millet with the other being 50% or less. They are lower growing with smaller stems which may be an advantage in certain grazing situations. If you do choose to use one of these millets, all should be grazed before seed head emergence to maintain regrowth potential. Foxtail millet should not be used for horses as it contains a toxin that can cause kidney and joint problems. Seeding rates for Japanese millet is similar to those for pearl millet. The other should be reduced by about ten pounds per acre.

More producers are using some crabgrass as summer forage. Others have made it their forage of choice. Several varieties are now on the market. While it won’t tolerate wet feet, crabgrass is well adapted to most soils, is drought tolerant, and responds to moisture quicker than most other summer annuals. It produces good growth from June to September with yields ranging from 3 to 5 tons per acre. It is highly palatable and usually higher quality than bermudagrass. Digestibility ranges from 62 to 72% and protein from 7 to 18% depending on stage of growth and nitrogen fertilization.

Crabgrass can be seeded into a prepared seedbed immediately after the last spring frost. Disking or other tillage during the dormant season seems to be necessary for productive reseeding. Nitrogen is most efficiently used in split applications at 50 to 75 pounds per acre two or three times during the growing season. An initial pre-emergence nitrogen application is very beneficial to stand development and productivity. Graze when grass is 4 inches tall. If natural reseeding is desired, the stand must be allowed to produce seed sometime during the summer. This works best with rotational grazing.

Annual lespedeza is adapted to most North Carolina soils with the exceptions of deep, dry sands. It tolerates low pH and fertility but will respond to fertilization. However, too much fertilizer will cause the lespedeza to be crowded out by more vigorous, higher yielding plants in the stand. The general growth period is May to October. Peak growth occurs in June, July, and August. It is high in quality with protein levels of 14 to 18% and 60 to 65% digestibility. In fact, early cut hay may be equal to alfalfa hay. Annual lespedeza is readily grazed and has relatively high levels of phosphorus, calcium, and magnesium. Even better, it can be grazed without worrying about bloat problems. On the down side, yields are relatively low at 1.5 to 2 tons per acre in pure stands and 2 to 3 tons when mixed with grasses.

There are two main types, Kobe and Korean. Kobe type does better in the coastal plain. Both perform well in the piedmont. Marion has been the most popular variety but a new variety, called Legend, is out now that seems to be performing well in tests. In some tests, the Legend has out yielded Marion by almost double. Ideally seeds should be planted in February but can be sown February thru April. Seeding rate is 20 to 30 pounds per acre and should be broad cast or put out with a seeder. Drills generally put the seed too deep as they should be no more than one-half inch in the ground, one-quarter inch or less being preferred. Grazing should be done in a rotational manner. If cut for hay, lespedeza should be cut in the early bloom stage. One note of caution, annual lespedeza can and will naturally reseed so it could become somewhat of a pest under certain conditions. But don’t plan on natural reseeding for the next year’s grazing!

One last note, don’t confuse the annual lespedeza with perennial Sericea lespedeza. It too tolerates low fertility and acid soils but is not nearly as high in quality. It is a perennial. It will spread. It can become a nuisance. Also, if allowed to get over about 18 inches tall, it will become hard, stemmy, woody, unpalatable, quality drops rapidly, tannin levels increase, and livestock will not eat it, except goats. Goats love the stuff. As a bonus, the high tannin levels have been shown to work as a natural dewormer in the goats. If very tall, they will only eat the top out and you’ll need to mow the tougher stems that are left. If grazed when 6 to 8 inches tall, it is eaten well by livestock. Sericea should be cut for hay when 12 inches tall and, whether grazed or mowed, should be taken no lower than 3 inches. Lime and fertilizer improve palatability. Seedling vigor is poor and it cannot be used the first year. Sericea is not typically recommended for planting but can be utilized if already on the farm. 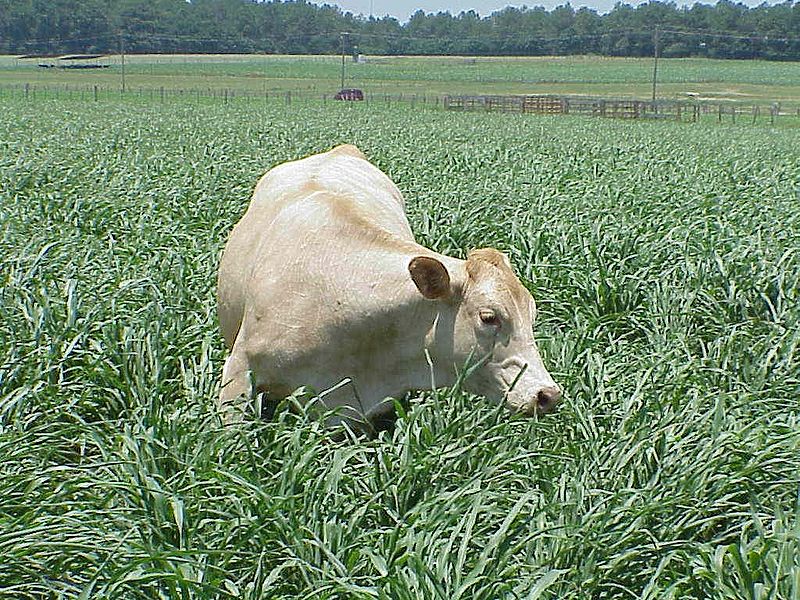