Find this article at:
go.ncsu.edu/readext?805730
— Written By Paul Gonzalez and last updated by Betty Draughon 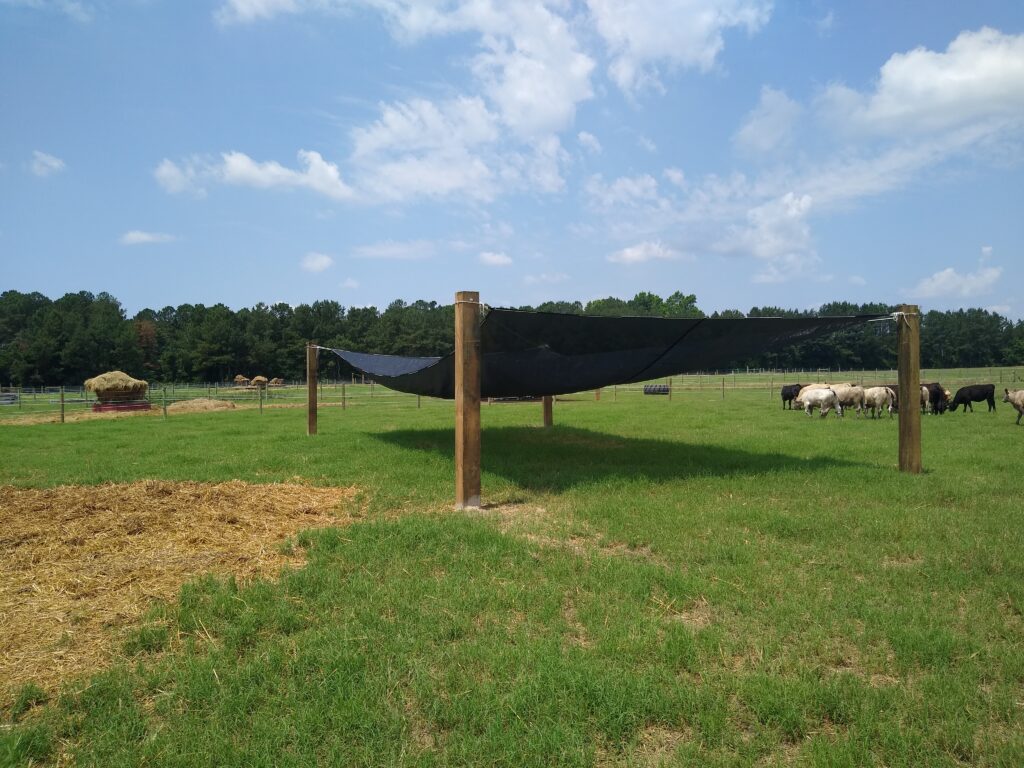 This subject inevitably comes up every summer. It can be a very polarizing topic too. Some people get fighting mad when they see animals out in the sun with no shade. Other people hardly bat an eye. No matter what side of the fence you fall on, we all know how hot it gets around here in July and August, and we have all seen hot animals standing out in the sun and in the shade. I am going to focus on cattle in this article but the basic premise applies to all livestock. We all see cattle while we are driving around, some have shade and some don’t. They all look hot but the ones without shade seem to be hotter and yes, I do get the occasional call from someone concerned about the cattle. But before I get into the meat of the article, I want to touch on a couple of points. As an Extension Agent, my job is to educate and assist producers by providing fact based, non-biased, research-based information so they can make the best possible choices for their respective operations. This information can be in the form of a meeting, a field day, conference, one on one conversation, or even in newsletters and articles. However, no matter the form of delivery, as an agent, I am supposed to keep opinion out of my recommendations. That said, I usually end up with a “Well, what should I do?” or “If they were your cows, what would you do?” or even a straight up, “What’s your opinion?”. Those of you who know me, know at that point, I will give you my opinion good or bad. Sometimes I probably give you more opinion than you want! My wife says I do like to talk. So, for this particular article, I am going to present the facts that I have pulled together and then I am going to give you my opinion. Just remember, it will be my opinion. Take it for what you think it is worth and keep going. I know some will agree and some will not. That is why it is an opinion.

The facts: We all know there are breed and coat color effects that play into the subject of heat stress in cattle. I am not going to spend time on that in this article as the majority of producers in Sampson County are dealing with black hided bos Taurus cattle. There isn’t a lot of research on cattle and shade. I did find a few studies and several “opinion” articles by university educators and even more by plain old producers. Most of the studies were done either with feedlot cattle, dairy cattle, or were focused on cows on endophyte infected fescue pastures. Several of the studies that did look at brood cows were from South American countries. The results tend to be contradictory. Some studies showed a shade affect and others did not. Heat stress can increase body temperature but not in all cases. One study showed no increase or decrease in growth compared to cattle in a similar environment without shade. Research in feedlots, indicated shade may be beneficial early on until cattle acclimate to summer temperatures. And cattle do have the ability to acclimate to their summer environment. Another feedlot study showed that cattle with 80 percent artificial shade had improved gain and feed conversion compared to those with no shade. A study in Uruguay demonstrated that cattle with shade spent less time grazing compared to those without shade but weight gain was similar. Another study I found stated there was no difference in grazing time between cattle with shade and no shade.

In studies where shade made a difference, the kind of shade, natural vs. man-made, also had an impact in some cases. An LSU grazing study involving heifers that had either 80 percent artificial shade or natural shade demonstrated no difference in animal performance. While a study at the University of Arkansas comparing permanent tin roof shade to trees and no shade indicated that in early summer there was a difference but over the entire study, there was no difference among treatments. Another University of Arkansas trial found that cattle with artificial shade had an increase in average daily gain of 20 percent and those with tree shade had a 60% increase over cattle with no shade. A study at the University of Kentucky showed a shade advantage in weight gain for cows, calves, and yearling steers. A University of Florida study found and increase in conception rate for cows with shade and the University of Missouri demonstrated an increased overall pregnancy rate.

So, you tell me. Do cattle need shade? Based on the research I am not sure there is a definitive answer. Some research shows a performance increase with shade and others don’t. I did find some articles that said it wasn’t just the heat but the combination of heat and humidity that made the difference. The higher the humidity, the more cattle tended to exhibit signs of heat stress. It is interesting to note that I didn’t find any articles that indicated an increase in death loss attributed to heat. Several also indicated that limited amount of shade could be worse on cattle as they all tended to group under the shade and eliminated any benefits due to the close proximity to each other.

So here is my two cents worth. I think they do need shade. Based on the research I found there seems to be benefits from providing shade even if there are no absolute negatives from no shade. I know when I am outside, I take full advantage of the shade when I can and I try not to be out if there is no shade. As a producer, I know a comfortable animal is a more productive animal. So, I want my cattle gaining, or conceiving, or even maintaining; so, if providing some shade will provide an assist, they are going to get shade. Additionally, it is hard for me to look at my cows and see them appear to be “suffering”. They may be able to acclimate to the temps but they still look hot to me. And finally, we need to look at the animal welfare perspective of the public.

More and more, people are becoming concerned with the welfare of the animals they are eating before it became food. As I stated at the beginning of this article, I do get calls about welfare, not only about heat but also about animals out in snow and ice and even about them standing in too much mud. The public is watching what we do and policing us more. Even if the research stated emphatically, “No. Cattle do not need shade!”, convincing the soccer mom or the retiree that moved in next door that the cow standing there panting, tongue hanging out, drool stringing out both sides of her mouth, is fine, may be an impossible task!