The Facts About Plant Oils

Find this article at:
go.ncsu.edu/readext?733098
— Written By Meghan Lassiter and last updated by Betty Draughon

There is a lot of confusing, and often conflicting, information in the media about which oil is the best for health. The information is confusing partly because plant oils are fats, and fats are complicated. Dietary ‘fats’ are actually composed of a mixture of molecules called fatty acids. Fatty acids come in different lengths, shapes, and chemical compositions. These factors determine how a fatty acid behaves in the body and how the body uses it. “Many online and social media sources claim that all ‘industrial’ or ‘refined’ plant oils are harmful to health,” says Dariush Mozaffarian, MD, DrPH, dean of the Friedman School of Nutrition Science and Policy and editor-in-chief of Tufts Health & Nutrition Letter. “If one looks at all of the research available, the cumulative evidence supports clear benefits, not harms, of plant oils.” Some of the key concerns and misconceptions are addressed here:

Overall, there is a large body of research demonstrating that unsaturated fats are good for health. “In controlled feeding studies in humans, eating unsaturated fats (either mono- or polyunsaturated) lowers LDL cholesterol and also improves blood sugar control and insulin sensitivity,” says Mozaffarian. Additionally, the popular idea that omega-6 and omega-3 PUFAs should be consumed in a certain ratio is not supported by research.

“Coconuts are a fruit, and, like other fruit oils, coconut oil contains numerous natural phytochemicals that may improve health,” says Mozaffarian. “I favor oils with stronger evidence for health benefits, however, like virgin olive, soybean, or canola oils. I suspect coconut oil is healthier than butter or starch and sugar, but this is a complex and controversial question for which more research is crucial.”

The larger issue behind this question is whether genetically modified (GM) foods are safe for humans and for the planet. Griffin was part of a study committee that spent two years preparing a 585-page report on genetically engineered crops. “At this point—about 20 years into the production of GM corn, soybean, and cotton crops—we found no apparent health or environmental risks, but we should continue to be vigilant. The biggest impact we found on human health and the environment was actually a positive one: there has been a large reduction in the amount of highly toxic chemicals being used to control insects.”

For consumers who wish to avoid genetically modified crops, organic oils are available—for a price. Crops certified as organic in the U.S. cannot use GM technology.

Plant oils are made by extracting the fats found in fruits (such as olives and coconuts), seeds (like canola, safflower, and sesame), nuts, and legumes (like peanuts). Several processes are used to refine, bleach, and deodorize oils to create the consistent, mild-tasting products to which many are accustomed. “Most of the major studies demonstrating health benefits of plant oils have used the typical commercially-available refined versions, so refined oils are a perfectly good choice,” says Alice Lichtenstein, DSc, director of the Cardiovascular Nutrition Laboratory at the Human Nutrition Research Center on Aging and executive editor of Tufts Health & Nutrition Letter. “If you prefer minimally processed oils, look for those labelled raw, cold-pressed, expeller-pressed, virgin, extra-virgin, or pure.” Unrefined oils usually have higher levels of phytochemicals, which may provide additional health benefits.

“Good general-purpose oils include soybean, canola, and corn,” says Lichtenstein. “After that, choose on the basis of taste—for example olive oil for salad dressing and sesame oil for stir-fries. The important thing is to choose plant oils that contain mainly unsaturated fatty acids, and use them in place of animal fats.” 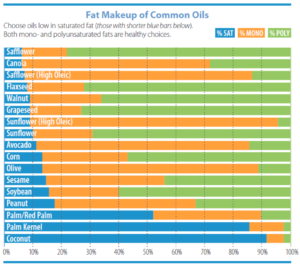 Try these tips when choosing oils:

-Use plant oils to replace butter, lard, and also starches and sugars in your diet.
-Use tropical oils (like coconut and palm) with caution. Long-term health effects of these oils are uncertain.
-Consider organic or cold-pressed oils, which may have additional health benefits from natural phytochemicals in the oils.
-Store oils in a cool, dry place and use within a year or less to avoid rancidity. Check for an “off” or paint-like odor before using.
-Cook with oils that can tolerate heat. Seeing smoke means unwanted free radicals may be forming. Do not reuse heated oils.