Over the past couple of weeks, a very familiar turfgrass disease, dollar spot, has begun its assault across much of North Carolina. We have observed this disease on creeping bentgrass putting greens and fairways (mountains).

The dollar spot fungus begins to grow and infect susceptible grasses in the spring when night temperatures exceed 50°F, even though symptoms of the disease may not appear until later in the spring or early summer. In addition, the pathogen requires extended periods of leaf wetness, 10 to 12 continuous hours. Heavy dews that often form during cool nights in the late spring or early summer are most conducive to the disease. Extended periods of wet, overcast weather can also lead to severe dollar spot epidemics on susceptible grasses. Dollar spot remains active throughout the summer in many areas, but disease activity typically slows when high temperatures consistently exceed 90°F.

Turfgrasses that are deficient in nutrients, especially nitrogen, are more prone to dollar spot and also recover from the damage more slowly than well-fertilized turf. The disease is also encouraged by drought stress, low mowing, excessive thatch accumulation, frequent irrigation, and low air movement. Certain cultivars of creeping bentgrass, perennial ryegrass, and Kentucky bluegrass are very susceptible to dollar spot, while others are fairly tolerant. 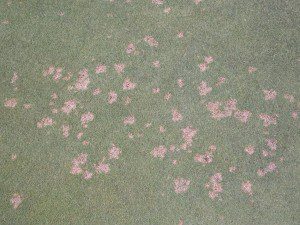 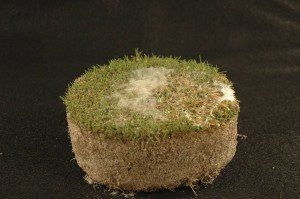